PlanNet is a Top Workplace!

Top Ranked Technology/Construction firm out of 50! PlanNet is pleased to announce that it has been selected as one of The Orange County Register Top Workplaces. 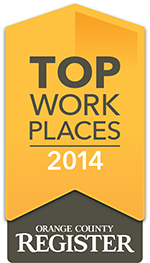 “PlanNet is honored and humbled to be named one of Orange County Register Top Workplaces for 2014. Since our founding in 2001, PlanNet has strived to create the type of work environment where people feel appreciated, respected and valued, not only by management, but by each other,” says Steve Miano, Managing Principal.

Culture: PlanNet’s commitment to its associates, clients and vendors has resulted in business growth and a winning culture. As a testament to our people-first philosophy, PlanNet is exceptionally stable with low turnover. The tenure is longer than the average company, and many of our team members have been with us ten years and counting.

Diversity: The firm has a diverse and rapidly growing clientele, which includes more than 1,000 global, fortune and middle-market companies and institutions across the U.S. and abroad. PlanNet’s team of consultants and data center construction professionals support a variety of engagements from workplace technology and systems migration to critical facilities design and construction.

Philanthropy: Believing that a man’s true wealth is measured by his actions and words, not his bank account, PlanNet volunteers and donates to several Orange County and Southern California-based charities such as Orangewood Children’s Foundation, Ronald McDonald House, Southern California Architectural Guild and Make a Wish Foundation, to name a few.

“PlanNet’s culture and atmosphere allow you to succeed, which is hard to find in most workplaces.”
– Trent Wright, Principal Consultant

“Most people say that they have to go to work, I actually get to go to work.”
– Jorge Meraz, RCDD, Senior Consultant

“PlanNet gives me the ability to grow, challenge my skills, and be part of a thriving team.”
– Michelle Rodriquez, Billing & Administrative Coordinator